Articles in German – Which One Should You Use?

These are so-called German articles, definite articles to be precise. The three articles are all equal to the English word “the.”

There is also the indefinite article “ein/eine,” the English “a or an.”

The primary Information the articles provide us with is the gender of the noun.

For a better overview, here’s a table:

When to Use Which Article?

The rule here is pretty straightforward:

If a person or thing is known, you have to use the direct article.

E.g., You’re on a walk in a city with a friend, and you comment on the houses. A possible sentence you could say is:

You have to use the direct article “das” because you’re talking about a specific thing. You’re not saying that you like red houses generally, but that you particularly like this red house.

This article usually comes before the definite article and describes things or people that are unknown, not determined, or nameless.

In this example, first, you have to use the article “ein Mann” because he’s unknown. In the second sentence, you’re talking about the specific man so you can use the definite article “the.”

🇩🇪 Ich will eine Katze.
🇺🇸 I want to have a cat.

In the sentence above, we use the indefinite article. You want to have a cat in general, and you’re not talking about a specific one.

Plural of the indefinite article

The plural of the definite article is “die,” for example, “die Eltern – the parents.”

If you take a closer look at the table earlier, you will notice there is no plural form of the indefinite article.

This is the so-called “Nullartikel” (article zero).

Here’s how to use it in a sentence:

You’ve probably come across these words as well.

Well, this is the moment where German gets a little bit complicated.

The Articles “der, die, das” are only used in the Nominative case.

The articles have an extra role in the German language. They don’t only inform you about the gender but also about the case. Depending on which case you have to use, the article will change.

I have explained the German case system in another article. I recommend it to you, so you can better understand German grammar.

I know it doesn’t look easy, but with some practice, I’m sure you’ll master it!

I’ll show you some valuable tips that can help you decide which gender a noun has.

However, I strongly recommend you learn a new noun with its corresponding article and even better with its plural form. The plural form in German is not as easy as the English one just by adding -s at the end of every noun (with few exceptions like mouse and mice).

Even though many German plural forms end with “-e” or “-en,” there are plenty of other words that don’t follow this rule. For example the plural of “das Haus” are “die Häuser” or the pulral of “das Fenster” is “die Fenster”.

See? It can get really tricky sometimes.

Let’s get back to the Gender Rules:

On the one hand, you can guess the article by the biological gender. A woman will always be female “die Frau” and a man masculine “der Mann.”

This is very often the rule if you’re talking about professions. E.g.:

For the female form of professions, you just need to add an “-in” at the end of the word:

So, a boy is “der Junge” right? Yes, that is correct. And a girl “die Mädchen”?  NO. The correct form is “das Mädchen”.  Seems logical or not?

The rule behind “das Mädchen” is the ending “-chen.” This is the second rule on how one can figure out which article a noun has.

Every article has a few endings that are a sign that you have to use this article. The following table shows the ends for the neutral article “das.”

The endings “-chen” and “-lein” are so-called diminutives. They are used to express the smallness of a thing or person. For example the diminutive of “die Katze”(the cat) is “das Kätzchen”(the kitty; little cat).

There are many exceptions from the last ending “-er,” e.g., “die Mutter”(mother).

Also, the word “die Butter” (butter) is feminine, but in some places of southern Germany, you will hear the word “der Butter.”

I hope I’ve helped you understand the German articles a little better! 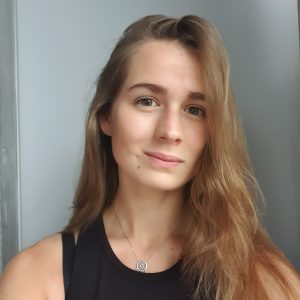 Young and passionate German online tutor with lots of energy. Fluent in 3 languages and currently polishing her Spanish and French.

How to Give Directions in German

100 Business German Words You Have to Know