The numbers we use are the universal language for the whole world (unless you don’t use the roman numerals). And when written in numerical form, they can be understood by almost everybody.

The problem starts when we talk about numbers. The spoken numerals, unfortunately, sound different in every language, also in German.

And to be honest, they are essential in daily life. You need them to communicate with other people about amounts, time, or dates.

Maybe you have already had a look at the introduction to numbers in the article about how to talk about years in German. If not – don’t worry – I am going to explain them to you from scratch.

And you’d better pay attention now because when you are in a real-life situation, you’ll have to count yourself.

Numbers to Twelve in German

Just as in many other languages, the essential thing about numbers is learning the first twelve because almost all the consequent numbers will be a mix of them.

If you can remember these, little can go wrong anymore!

German Number up to 19

Let’s see how the numerals from thirteen to nineteen are built in German:

It is easy to notice that the German strategy of building these numbers is just the same as the English one. You just take the relevant numeral from 3 to 9 and add the suffix “-zehn” (“-teen”).

Let’s go further and see what the tens are like in German.

The construction is very similar:

How to say Bigger Numbers in German

I’d like to continue with numbers with some more zeros at the end.

Now at this point, we know pretty much all about the numbers in German.

But not all numbers are that simple and round in real life. That would be too easy and too boring.

How do Germans Say Numbers

Now, this part will be a little bit more tricky, but don’t worry – it will also be logical and easy for you if you understand one principle.

Let us have a look at the numbers between 21 and 99 first.

You just have to think this sentence in your head:

“Say it in reverse order.”

It sounds and indeed is easy, but I can tell you from my experience that even though German is like my second native language, I sometimes have to think three seconds before I get the number in the proper order in my head.

What do I mean with reverse order?

Let’s start with two-digit numbers. Actually, this rule only applies to them.

The easiest way to explain it is to show you an example.

The number 67 in German is siebenundsechzig – a literal translation of this word is “seven-and-sixty”.

And that is the way you treat all of the German numbers between 21 and 99. You have to:

Here are some more examples for you to practice:

As I said, this rule only applies to two-digit numbers or the two last digits of a bigger number, respectively.

So if you want to say 173, it would be ein-hundert-drei-und-siebzig (“one-hundred-three-and-seventy”). I used the hyphens to make it easier to read and understand, but you usually write the whole number without them.

All of the bigger numbers are built in the same way. You have to say the thousands, hundreds, and so on first and then change the order of the last two digits. Here are some examples:

I know the long words look really terrible. I would also prefer to write them with spaces or hyphens, but the rules are like they are.

And if you understand the rules and practice a little bit, it won’t be that bad at all for you.

There is a big difference between saying “you are the one” and “you are the first” to someone. You should be careful about using numbers and ordinal numbers.

But it is pretty easy to learn the ordinals in German if you already know the “normal” numbers.

The only two exceptions you have to know are:

All other numbers between 2 and 19 are structured by adding “-te” to the number. For example:

It is a big step in learning to say the German numbers correctly, but sometimes you are the one who wants to ask about a date, amount or time.

Here is how you do it:

When asking about ordinals, you also have to add the suffix “-te”, even if the translation is the same:

🇩🇪 Wievielte? – 🇺🇸 How many?

Often, the word-for-word translation is not possible in this case:

🇩🇪 Wievielte(r)* wurdest Du? – 🇺🇸 In which place did you come?

*You have to add the “r” when asking a boy/man or leave it out when asking a girl or woman because the word applies to themselves.

🇩🇪 Wievielter ist heute? – 🇺🇸 What date is it today?

Here the word “wievielter” applies to the word “Tag” (“day”), which is masculine in German, so you have to add “r” at the end.

🇩🇪 Wieviel Uhr ist es? – 🇺🇸 What time is it?

Telling and asking about time in German is another big topic. But it shouldn’t be a problem for you now you know how to say German numbers. 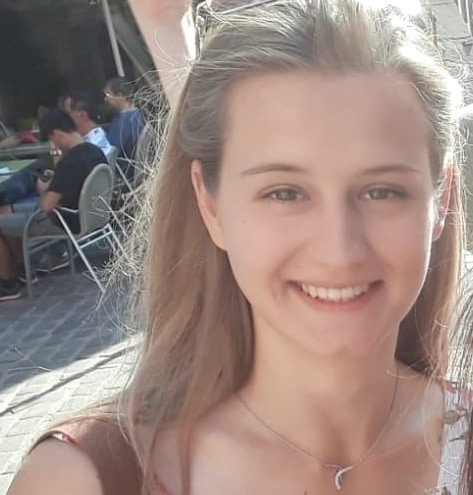 Living and studying in Germany for as long as she can remember. German tutor by day, Italian learner by night. When she's not learning new languages, you can find her enjoying great rock bands on stage.

50 Ways to Say Goodbye in German like a Native

How to Learn and Remember the Spanish Alphabet